The bracket finally arrived for the auto-feed stop. A friend at work had it done for me, he uses a firm that uses high pressure water jets to cut aluminium, I gave him a 2D CAD file of the shape and they cut it out of a 20mm thick piece of Aluminium using water!

As is normal, for me at least, there were a couple of things that didn't quite fit, the top of the middle upright clashed with the gear for the cross slide travel so I removed 10mm from the top and then the front edge clashed with the back of the half nuts so I made it 5mm thinner.

It was apparent that I wouldn't be able to put a securing bolt through the front of the bracket as there was just no clearance from the leadscrew so I drilled and tapped from the rear, you need to put the spanner through the gap in the bed but it works fine and will be less fiddly to tighten once I shorten the bolt.
So, once I got it fitted to the lathe and tightened up it was time to see if it actually worked.

Success, it needs a bit more work and tidying up, I want to shape the lever and line it up a bit better and add a long M6 bolt in the hole in the bracket to give me some fine adjustment.

I'm also thinking about adding a spring and a latch mechanism which will fully disengage the lever when it's tripped as it currently stops the auto feed but doesn't fully reset the lever position.

I hope to test it out later with a thread I want to cut, if everything works out I will have succeeded in adding auto feed stop to the lathe with minimal modifications to the lathe itself.

If anyone wants the 3D model I can make it public on tinkercad.com, just ask in the comments. 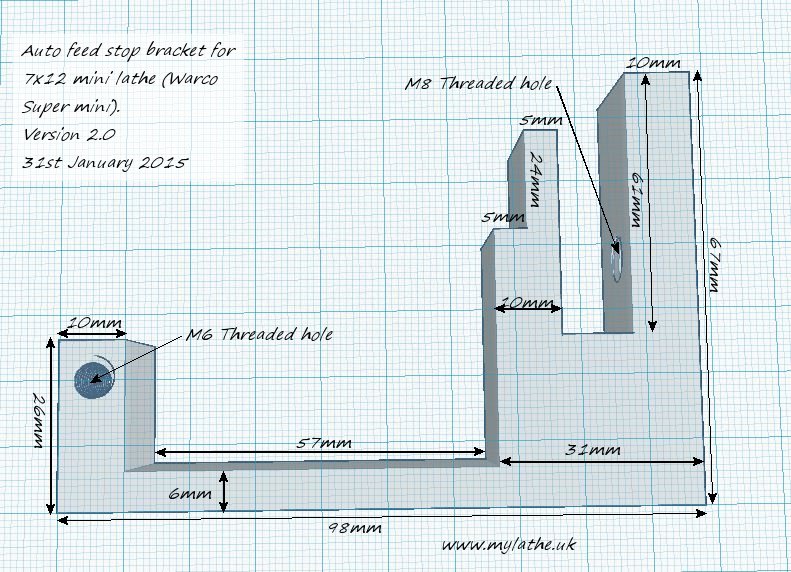